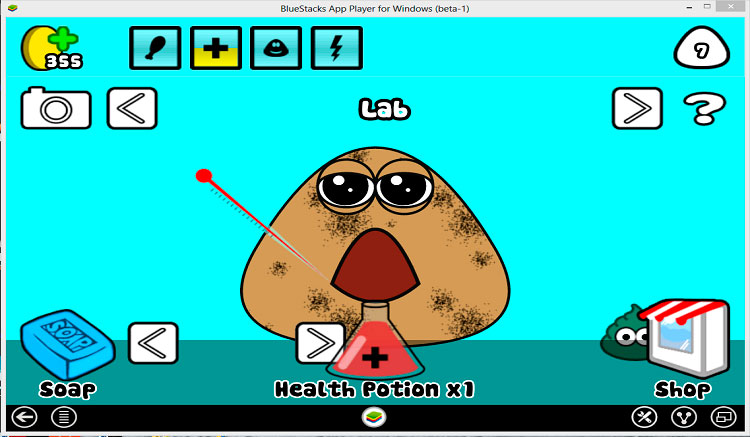 Pou is a virtual pet app for Android. Pou is a strange alien creature who you must feed, clean, and play with to raise strong and healthy.

Pou starts his life as a small blob. When you run your finger over the screen, Pou will follow it with his eyes.

At the bottom of the screen you'll see your various inventory objects, and at the top, the statistics. The first and most important thing to do is feed Pou. You simple drag food into his mouth to satisfy his hunger. You'll notice that this will improve his mood and reduce his appetite. However, at the same time it will get him dirty. To solve this problem you'll need to start visiting the rooms of the house. House, you say?

Yes, Pou lives in a house complete with kitchen, laboratory, games room, and a bedroom. In the kitchen, Pou gets his food; in the bedroom he sleeps; and the games room he plays, obviously.

But what about the laboratory? Well, here is where you can clean Pou and make him better.

You can personalize Pou's appearance to suit your tastes, which requires you to buy objects from the store within the app. Some items cost more than others. You can accumulate game currency over time, but if you run out of patience you can buy stuff with real money. After a few hours of playing, Pou will have passed its set level of development and will stop being a kid anymore. If you want to take a photo of him you can - or you can choose to send your Pou to visit your friends' Pous.

Owning a pet is never easy. One of the reasons for the huge success of Pou is its simplicity.

The creature doesn't move and his eyes follow your finger around the screen. Washing, dressing and feeding Pou is simply a matter of dragging objects onto him. The indicators help you to not lose sight of your pet's needs, and the two slide-out menus allow you to quickly change the wallpaper of a room or change the selected object. In the mini games within Pou the controls are just as simple: sliding rows of colored Pous, jumping platforms, or collecting falling food just requires you to slide your finger in one direction or another.